Ford Fischer and his News2Share cameras were busy in the last weeks, as dueling protests between pro-choice and and pro-life activists visited the Supreme Court, the homes of several of its justices, the DC Medical Examiner’s office, and other locations.

This is a 26-minute video that shows a broad range of activist responses to the leaked news of an opinion written by Samuel Alito purporting to overturn Roe v. Wade. The motive behind the leak remains among the more compelling (and impenetrable) Washington mysteries in recent times. There are theories the draft was leaked to prevent a conservative judge from having a change of heart, and theories it was leaked by the other side to stimulate fundraising. News from this week, in which a Senate gambit to enshrine abortion rights through legislation failed, did little to elucidate the situation.

The News2Share cameras capture the astonishing variety of emotions and seemingly unthinkable new bedfellows brought about by the leak. “Existential” makes a predictable appearance, as does coat hanger imagery, but would you believe left and right activists teaming up in a nervous co-demonstration (“Trans rights begin at conception!” shouts one protester). There is violence, with a pro-lifer kicked in the hind-parts, one California demonstrator “unarrested” in the face of rising crowd upset, and other episodes. Massachusetts Senator Elizabeth Warren, who has been highly visible at pro-choice demonstrations, also makes an appearance.

More as the story develops. Thanks to Ford and the News2Share crew.”

How do you actually have a constructive communication with Crazy? 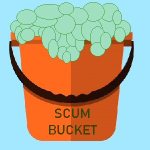 …Feed, Shelter, Clothe and Nurture The Children with That Money, You Piece Of Shit!!!

“The requirements for Windows 11 include UEFI, Secure Boot, and a Trusted Platform Module (TPM). This is how Microsoft will make every piece of computing hardware submit to their whims within the next decade. Do you own your computer or not?”

Windows 11 Must Be Stopped: THE SEQUEL – Jody Bruchon:

“This is a follow-up to my popular Windows 11 video. I respond to several of the common comments and criticisms and give a lot more detail. Unfortunately, it’s a long one, but none of it wastes your time. Feel free to speed it up, or listen instead of watch.”

Microsoft does whatever it wants, whenever it wants…and the nameless, faceless people behind all of this are entirely out of reach…or even contact…as far as I can see.

I’m currently dealing with the layered on bullshit, of the chronic reboot raping Microsoft has been doing to me for a year and a half, with rapid fire updates that wont stop coming…

…I literally rebooted to install…just to have this system tell me I had another update waiting for install, after it became stable again…So, I reboot the day after last reboot…just to have another fucking update appear the very next day, after two days of rebooting and waiting…Fucking Microsoft CUNTS!!!

I need to do some serious backup of data and work…do a reboot to get that out of the way…then I’m going to try installing something from Microcunts […Oh!…Excuse me…Microshit…Oops!…Microshaft…Oh!, you know what I mean!], which is supposed to reinstall and fix fundamental registries…code…whatever…critical stuff for WinBlows 10.

Why wont they just leave me the fuck alone?

I think…I just might go into “the big city”, and buy a Mac…Maybe I’ll do it tonight…Take my first step at migration…Jesus, I fucking hate this…I have no idea what all I’m going to be losing, where it comes to all my favorite software I am familiar with and use religiously…and what purchased licenses may no longer be of use to me…and all the pain in the ass, of moving my content to a new computer…juggling everything all over the place, so I don’t lose anything [which is highly probable to happen]…I don’t want to have to relearn new software, or buy any licenses.

I more less have this PC how I want it, software, links and folder structure wise…It’s logged into so, so many of my online accounts…and now I’m going to have to manually get an entire new computer up to speed with that…Fuck!…

I’m not buying another WinBlows PC…Those fuckers are to invasive, and they don’t give a single fuck about their customers.